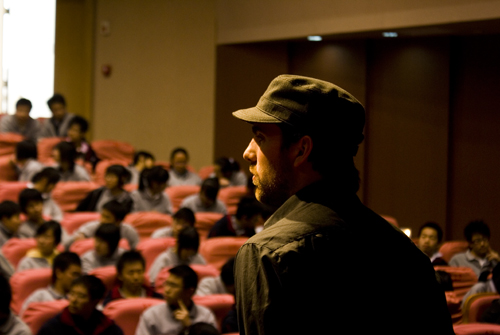 Arriving back to Shanghai at 13.40 straight from The 4th International Chemical Fiber and Yarn Products Investments Seminar in Tongxiang Nicklas, Anders Fredsø and Søren went to SES (Shanghai Experimental School) to facilitate a workshop. We were given the task to do a lecture in a high school, for students having a series of lectures about “new ways of thinking, discussing and communicating”. We had more or less free hands in order to plan the one hour given. The only rule was “not to touch upon sensitive topics” such as Tibet/Taiwan and censorship… Phillip and Henrique had the day before done a similar thing (at an other school). We used the feedback they got as inspiration when designing our program. It was a rough task: 240 students, 15 years of age, semi English level and only one hour, 3 facilitators.

The room we had was a huge auditorium where everybody was supposed to sit down all the time – a challenge since we had planned to move around with them a lot.

Nonetheless we started our program. There was a lot of noise but after a good solid Danish whistle (red. “pift”) there was complete silence! Great, we started our introduction of the three of us, Denmark and The Kaospilots.

We in our eagerness and confidence started without microphone – rather ambitious considering the room and the amount of people. After a little while the noise level and the amount of chitchat raised so we had to turn to the mic. The chitchatting in the young crowd became a thing that was there during the whole workshop – more on that.

So, we turned on the microphone and asked for 10 volunteers who would have the task of observing while participating and then give a brief evaluation in the end of the program – after some giggling and hesitation a brave young man stood up and soon we had ten people signed up for the job.

The first assignment was a listening exercise, focusing on good experiences. we asked the students to pair up, and “tell a story where you learned something in life”. The exercise is about listening and being listened to. When the first task was over, we asked them to tell/listen about a situation during their education where they learned the most. The outcome was interesting. The students seemed to have a hard time interacting with others than their friends. Shyness, precariousness and excitement seemed to be the key words for the students.

The ChitChat was ongoing, and getting the attention was a hard mission even with the microphone. We therefore improvised a focus exercise. Everyone had to close their eyes and hands. During a timeframe of two minutes they should then -in deeeeeeep silence- and with closed eyes, slowly open their hands for the two minutes. It was a great experience to see the silent site of the students as well, at least for two minutes…

The next exercise was a short version of “Take A Stand” . The four corners was divided: Agree, Strongly agree, Disagree, Strongly disagree. After announcing the idea behind the exercise, about different opinions can lead to great dialogues and most likely new insight as well. We gave the statement that: “Education is more important than experience.” The room became alive! Noise level was turned up… talks, laughter, disagreement, agreement, chitchatting and good vibes was in the room. Suddenly the room was divided in two large camps. Surprisingly the majority of the room was standing at Strongly disagree and Disagree. Few brave ones stood on the agree and strongly agree site. We now opened the floor for talks and encouraged the students to take talks with students from different corners. The talks we understood seemed great and interesting!

As a sum-up we invited our announced observers to come to the stage and present their impression of the day. This was in order to get feedback from the group and to leave the room with a feeling of knowing how they (the student) found the day.
Their new insight and feedback was smashing! “I learned how important communication is! how much i can learn from my friends, just by talking about disagreement on various subjects!” sentences like this was presented to the whole group by our observers.

We had a warm thanks from the teachers, and were asked if we wanted to come back next week… For an even bigger workshop! Lets see what will happen!!

We can by now conclude that the cultural difference also exist in a young age! That similarities between teenagers also are present!

All in all we 3 guys can say that this was great experience, a lot of fun and a thing that we would definitely not have been without!

Big up from Anders F, Nicklas and Søren