Warning: "continue" targeting switch is equivalent to "break". Did you mean to use "continue 2"? in /var/www/sorenbosteendahl.com/public_html/wp-content/plugins/revslider/includes/operations.class.php on line 2364
 Next stop Japan // - SorenBoSteendahl 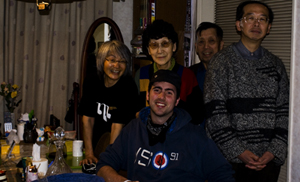 wake up call, 06.00 metro take off from Chansu lu st. to people square. 06.30 departure towards Science and Technology center. 07.00 Maglev train departure towards Shanghai international airport in Pudon. two words about the Maglev train: it toke of at 07.00, and 30 km later and no less than 7 minutes i stood in the airport. The train gets a speed of 400 km/h … it was an extreme experience to travel with that speed above ground!  the link to the train web page is:

Arriving in Tokyo International airport without the home address for my friend Nei, was a challenge. At the immigration paper there is a slot saying: address in Japan. Trying to explain that i was going to see my good friend, and didn´t know his address was quit time consuming. Any way. after the third check for Narcotics and bombs I was free to enter Japan!!! And there i was in the arrival hall with no sight of my friend Nei Kodama. My plane was about 1 hour delayed, and i kept looking for a smiling japanese guy, with black hair, one and a half head shorter than me… impossible! that description fits all the japanese men in the airport… after a while i started to picture the scenario of not finding him. I had no telephone nr. no address… I went to the information disc and had his named called all over tokyo airport… Mr. Nei kodama, Mr. Soren is waiting for you in the reception….  Wupti! 10 min later a happy japanese guy came jumping!

The day past by meeting his very friendly and kind family. Nearly all of them. New and interesting japanese food has been tried and Tokyo is waiting to be explored!