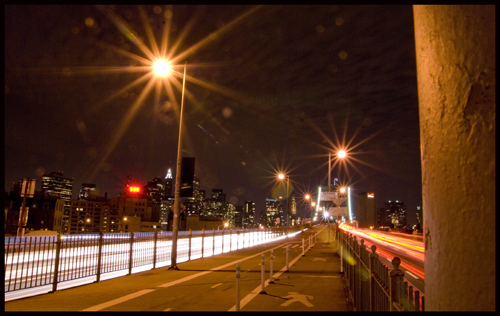 The trip has begun, New York is the target, Experiences, education, insights and curiosity are the agenda. Johannes and I have spend some time to settle in before the project kicks of. Later on today we gonna meet our client and specify our task. When that is done the project can start.

(Manhattan seen from the Brooklyn Bridge)

When settling in we have done what we like doing the most; getting lost in the city, walk around, finding a way back and then get lost again. suddenly something happens and the experience turns out amazing. We ended up way-out in the middle of nothing in the industry area of Brooklyn, where we were told a new music scene had started. A new bar with a scene playing upcoming bands, a great atmosphere and 5 weeks old. There was literally nothing in the area, even though people came popping up, walking in the door. smiling, and enjoying the music. check out the venue space here http://www.thebellhouseny.com/

(Statue of liberty, seen from the Brooklyn Bridge)
Last night after walking the Brooklyn bridge when the darkness crawled over Manhattan, we wanted to check out a local poetry club. The plan was to chill and lean back with a beer and listen to some slamming political poetry from the local youths. We found the place and paid the entrance, went to the bar, got a beer and then started to move towards the stage. Here we began to pay attention to the crowd we where in, all dressed in black – gothic kind of people – very heavy metal inspired- and out of the blue a massive death metal band started to scream and play loud trash metal! we where standing in the middle of New york subculture for extreme heavy metal!! it was a setup arranged by a group called “heavy hitter inc” and different bands from all around had a short performance. They were extremely technically skilled and it was an amazing experience -though not expected-
The “so called dance” in the front of the stage ended up in a massive fight, suddenly the bass player jumped down from the stage and gave all he had to stop the fight… the music stopped and after a while the fight stopped as well. Both Johannes and I, was standing so far in back that we had no chance to either see what happened or stop what was going on… light got switched on, trouble makers kicked out, band members being upset for idiots destroying their performance and two Danes observing a New York underground subculture boiling. We left when the beer was finished.

So basically we have spend our time feeling the American culture, tasting the fast food, talking with locals and getting lost -not in translation this time, more in madness-

(The classic yellow cabs all over the town, and More taxi drivers are Wanted…)

A nightclub got closed down recently, We were asked if we wanted to make a new… This art piece is placed at the front door

After conversations with some locals, and reading the statistics, it seems like Obama will win the New York State. We still haven´t met one single person who thinks Mc Cain is worth any thing…

–> more will come! and feel free to comment and ask questions.